Comedy Writing: How to Get on Staff and Write for TV 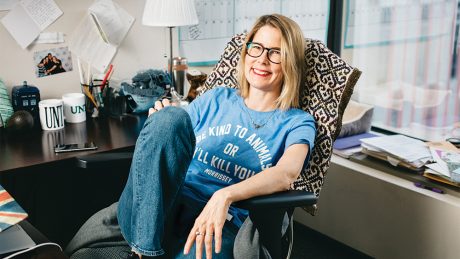 Jo Miller is a writer and producer, known for The Daily Show with Trevor Noah (1996),Full Frontal with Samantha Bee (2016) and The Rally to Restore Sanity and/or Fear(2010).

Comedy Writing: How to Get on Staff and Write for TV

In this webinar, Ms. Miller is going to show how female comedy writers can develop their voice, gain confidence, and submit themselves for TV jobs.

If you haven’t watched “Full Frontal with Samantha Bee” your life isn’t complete. This show is a breakthrough in feminist comedy. Hell, all comedy.

Most of you know Samantha from her hilarious appearances as a correspondent on “The Daily Show” with Jon Stewart. In “Full Frontal with Samantha Bee,” she gives cutting edge commentary on the news with a monologue so dense with jokes, that I advise keeping asthma medication nearby. You’ll hear comedy material you won’t hear elsewhere — on abortion, the election, and her favorite target, Ted Cruz. Only Sam and her brilliant writers could twist Cruz’s failed campaign into a commentary on abortion rights: “Shouldn’t Ted Cruz have been forced to carry his unviable campaign to term?” Bulls eye!

At a Writer’s Guild event, I got to talk to Jo Miller, Full Frontal’s Show Runner, who told me how she hires writers.

[Note: the quotes below are recollections of what we talked about recorded after I’d had two drinks so you can be sure that Jo was a lot funnier.]

“We find people from Twitter. Twitter is a great way for comedy writers to express themselves. From someone’s Twitter feed, I can hear his or her ‘voice’. I actively look for funny writers and often email them encouraging them to continue. For me Twitter is better than any agent.”

“We do ‘blind hiring,” meaning when we read someone’s material, we don’t know anyone’s gender, age, or race. We focus on the material. That’s how I was hired (Jo is 49) to write on ‘The Daily Show’ as one of the few, older, female writers.”

Jo is that rare success story that cares about women writers as she said “Not enough women submit material to us. Women don’t seem to have the same confidence men do and put themselves down. It’s not unusual for me to see someone who has great talent and doesn’t seem to know it.”

“When looking through submissions, we don’t always pick people who have the same humor as we do. Our writing staff contains many different writing styles. We have the joke machine who throws out one-liners like a tennis ball machine. There’s an equally important angry feminist. When submitting, rather than trying to change your writing to the show, be true to yourself.